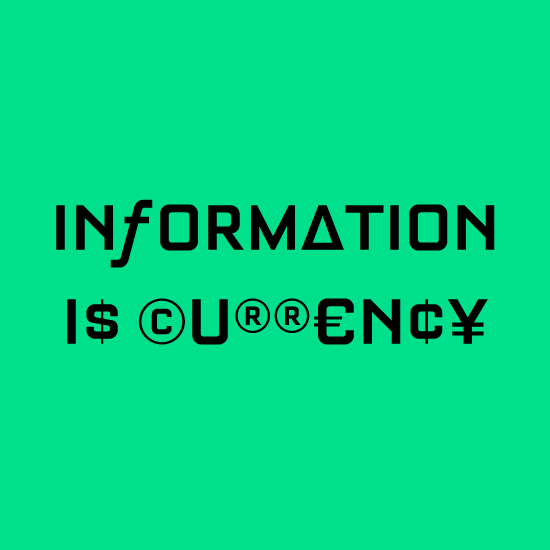 We are taking in a poster exhibition which opens this week at The Book Club in east London. Visit the exhibition before the 31st of July to see our poster.

Information IS Currency
‘Information is the currency of democracy’. Thomas Jefferson, the third U.S President, is credited with these words, which take on ever-broader meaning in the age of the internet. This very same expression is now available to purchase online as a car bumper sticker. Perhaps even more relevant today is a further phrase that is derived from the original: ‘Information IS Currency.’ The WikiLeaks cable releases of the last year and subsequent fallouts have highlighted both the potency and currency of such information together with it’s latent value to individuals.

This exhibition and these art works, from a variety of designers, illustrators, typographers and artists, are each a unique and personal perspective on these events, cables and themes. Wider issues are explored here such as those of; information, our freedoms to publish and access it, and how we might filter exponentially available amounts of such. Some works are direct visual responses to a particular cable release, where others explore the scandals and media circus surrounding the figurehead of WikiLeaks. The responses are individual to the exhibitor and the open brief is non-partisan as it remains necessary to best represent the open and somewhat democratic platform that the internet was, and may still remain in part at least, both today and in the future.

Whilst many of the exhibitors are active in the world of fine arts, all work within the commercial design and advertising worlds; producing artwork and branding for the likes of D&AD to Rolling Stone, from the BBC to skate brands. The exhibition is sure to provide a fresh and provocative range of concepts, opinions and reactions. Further to the central themes of the exhibit, the show also acts as a catalyst for discussion and debate about the role of designers, artists and illustrators in social or political spheres.

Foreword on the currency of Information:
Information as currency has proven itself such in many forms, guises and outcomes. One example is in it’s bringing down of presidents past, the word ‘Watergate’ for example, still resonates today. Social networks have become tools for democratic revolution, but conversely a tool in the trade of users’ personal data between the network providers, agencies and investors. Confidential personal information is sought by media organisations, in some cases illegally garnered, for the spoils of high readership sales. Even latent information carries currency, one that politicians and affiliated corporations value enough to ensure it remains buried. The U.S. Government sees WikiLeaks, or rather; their releasing of further sensitive information as ‘a threat’. Claims of ‘theft’ and information being ‘illegal’ are leveled at Wikileaks who likewise make similar claims against The Guardian sharing this same info with the Times. Who owns information? The information about our government’s actions? About you and your buying habits online? And how do we define illegal versus legal information and the rightful sharing of?

In the last months we have witnessed the expansion of the political fallout into the online world with several major online brands and credit companies cutting off their relationship to WikiLeaks and subsequently these direct portals of financial supply to them. WikiLeaks in turn uses their latent information as ‘insurance files’ to be released ‘should something happen to me or WikiLeaks’. (Assange). Anonymous hackers in support of the organisation have called for ‘…a war of data’. Wherever information lives online; in transit, user profiles, buying behavior, underground bunkers, encrypted or decrypted; it is now beyond being measured in currency, it has become today’s currency.