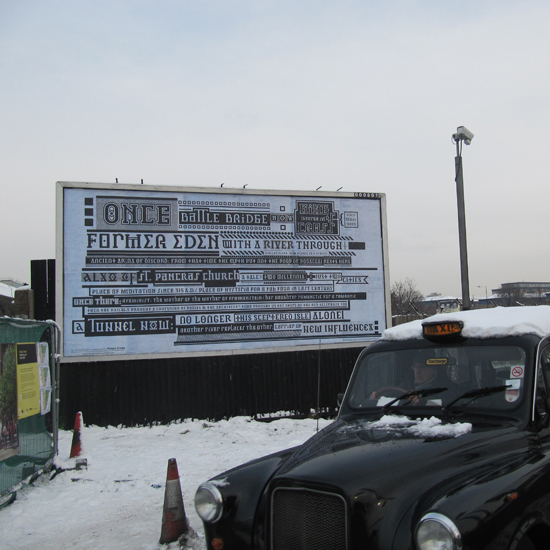 For the next 3 or 4 weeks if you are travelling past King’s Cross please pause for a moment on Goodsway London to take in a new billboard that the studio has just completed.

The subject matter? King’s Cross of course. A historically signifcant area which is now changing drastically. Our text explores what has happened in the past there, the importance of St. Pancras church, and the [positive] philosophical significance of Britain no longer being an island but connected to mainland Europe via the Channel tunnel from St. Pancras train station.

The text contains these references:
– That King’s Cross was once called ‘Battle Bridge’.
– The reason for the name ‘Kings Cross’ – there was a monument to King George the Fourth which was demolished.
– The Fleet River once flowed overground here but is now contained in the sewerage system.
– The misinformation that Boudica leader of the East British uprising against the Roman Empire is buried under the platform of St. Pancras station.

The importance of St. Pancras church:
– Its location being a place of meditation since 315AD.
– The body of noted feminist Mary Wollstonecraft Godwin was was once buried here, she is the mother of mary shelley, the author of ‘frankenstein’.
– Mary Shelley met Shelley the Romantic poet by the grave of her mother.
– The Beatles had their picture taken in the church for part of promo images of ‘Let it be’
– The moving of bodies in the 19th century and 20th century for railway works and Thomas Hardy’s reference to it in the poem ‘The Levelled Churchyard’
– A reference to the church in ‘A Tale of Two Cities’ by Charles Dickens.
– The shape of the red telephone box by Gilbert Scott being based on the tomb of Sir John Soane.

The final part of the text is about Britain no longer being an island because of the Channel Tunnel. An interesting physcogeographical moment, the River Fleet has been replaced by a new river of people bringing a new positive influence upon us. ‘Sceptered isle’ refers to shakespeare’s description of the UK in ‘Richard II’.

Special thanks go to Minnie Weisz Studio for the commission and King’s Cross Central for the funding. 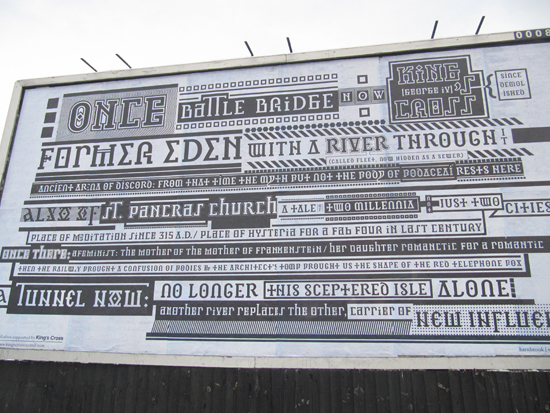 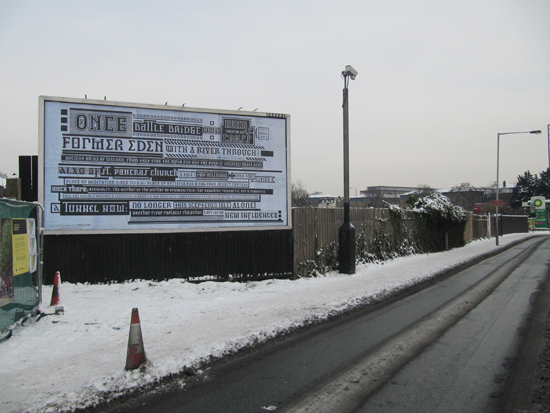