Barnbrook were invited to contribute to a new exhibition of graphic design from the United Kingdom, UK? OK!!, which opened on Friday at Parco Factory in Shibuya, Tokyo. The exhibition features the work of graphic design luminaries such as Tomato, Neville Brody and Non-Format and is curated around the idea of sound. Our submission was a poster – Murmurs – a visualisation of The Sounds of Earth, an audio track on The Golden Record – a 12-inch gold-plated copper disk that was sent into space by NASA aboard the Voyager spacecrafts in 1977. 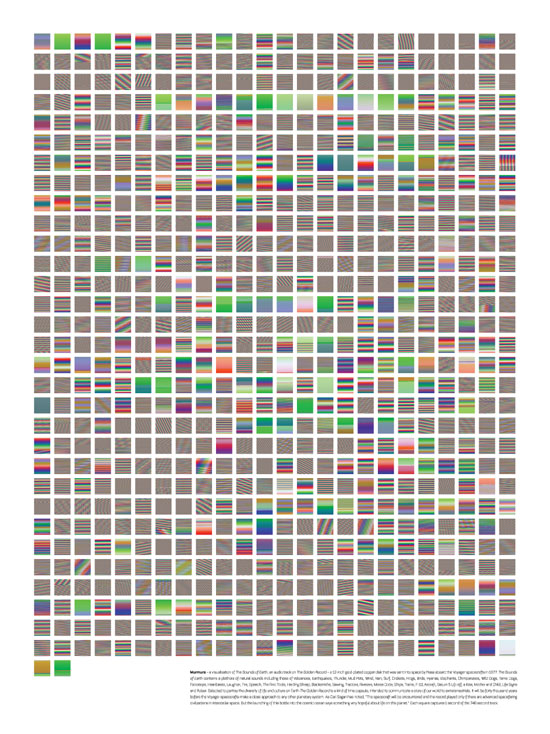 The Sounds of Earth contains a plethora of natural sounds including those of Volcanoes, Earthquakes, Thunder, Mud Pots, Wind, Rain, Surf, Crickets, Frogs, Birds, Hyenas, Elephants, Chimpanzees, Wild Dogs, Tame Dogs, Footsteps, Heartbeats, Laughter, Fire, Speech, The First Tools, Herding Sheep, Blacksmiths, Sawing, Tractors, Riveters, Morse Code, Ships, Trains, F-111 Aircraft, Saturn 5 Lift-off, a Kiss, Mother and Child, Life Signs and Pulsar. Selected to portray the diversity of life and culture on Earth The Golden Record is a kind of time capsule, intended to communicate a story of our world to extraterrestrials. It will be forty thousand years before the Voyager spacecrafts make a close approach to any other planetary system. As Carl Sagan has noted, “The spacecraft will be encountered and the record played only if there are advanced spacefaring civilizations in interstellar space. But the launching of this bottle into the cosmic ocean says something very hopeful about life on this planet.” Each coloured square in the poster captures 1 second of the 746 second track.

For more information on the exhibition you can follow UK? OK!! on twitter or check out the Parco Art site (links are in Japanese).